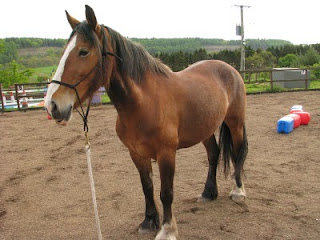 The lovely Abbey, she has a four reasonable feet, now barefoot and recovering after many years of shoeing and showjumping, her feet are improving all the time but she is not 100% sound. 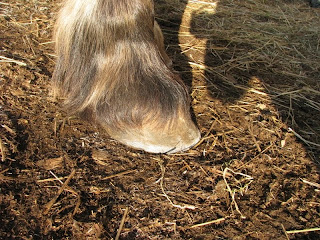 this is her front right hoof, called the off fore, after being trimmed just over a month ago, I have been taking occasional photographs to show the improvements. 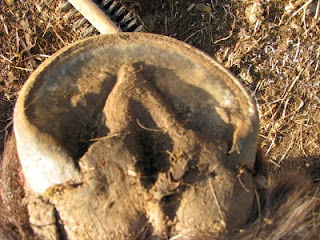 this is the bottom of the same hoof at the time of trim, this is the hoof that now has the deep cut in it. 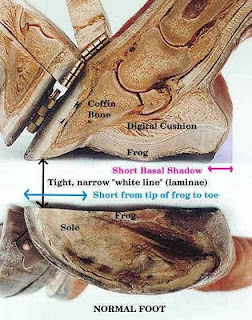 photograph of internal hoof borrowed from Natural Horse Trim
you can see in this detailed(and very real!!) anatomy that the frog covers and protects the digital cushion which protects the insides of a very complicated process. its designed by nature to be perfect just as it is. no shoes thankyou. Abbey has a very deep cut, if it gets infection in the frog that is not good. if it is deep enough to get infection in the digital cusion that is even worse. if it had been deep enough to get as far as the bones she would be in pony pastures over the rainbow by now. the broken bottle neck has caused a cut which is at the deepest part of the frog which is why she is still with us. although Abbey is not lamed by this I am on high alert to prevent infection and will be for some time.

Posted by clairesgarden at 10:05 am

Oh, now that I can see the whole foot it makes sense! Thanks for the lesson!

very welcome! today it looks like the main worry should be over, still on high alert though.

all your TLC is paying off. well done! pretty horrible that the bottle bit was in there in the first place though!

Remind me when we are next about to show you Jake's frog's injury. Hopefully, it will put your mind at rest. He also had a nail right near the frog without any problems, which apparently I should have got the vet to remove! Without any trouble at all, just bathing in hibiscrub. Tried a dressing, but he chewed it off! Abbey will be OK. Hugs x