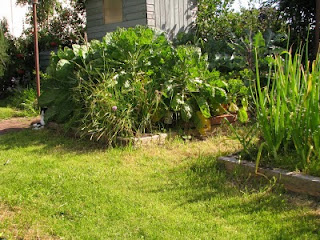 the vegetable beds have 'edges', wow! haven't seen them for a looooog time!! I gave in and asked a local grass cutter to do the grass and the strimming, over the last couple of weeks there has been so much rain that it has been left to get too long. I have managed to cut most of the hedge by starting a 'little bit at a time' when I had time and it was dry..to look at it in one go is too much, so I did 'up to the post' , then 'up to the tree' , and so on, there is still a couple of sections to do but I feel that they are achievable in the near future. 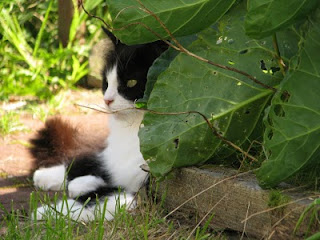 Tansy right at the edge of the first photo. 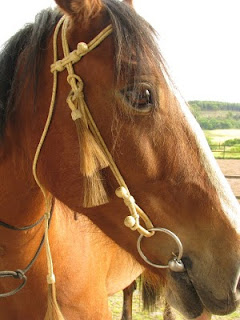 Abbey and I have been out riding round the fields, I love the peace and quiet. Not all is peaceful, I have purchased a small MP3 player with its own little speaker so that Abbey and I can have some music to listen to when practicing our flexion and cantering and 'stuff' when we are in the riding arena. I am a bit deaf so cannot stand putting headphones in or over my ears, also stereo becomes very strange when you cannot hear in one ear! As it is a yard where there is a house near, and other people about I think it would be impolite to have a full size stereo blaring while we rode. I always enjoyed the music playing at the two Quantum Savvy riding clinics I went to...one with Abbey and the first one with Katie. Who knows what the horses think? Abbey tried to eat the player when I showed it to her-I didn't want her to get a fright if I turned it on suddenly, ha, a whole new meaning to internal music...... 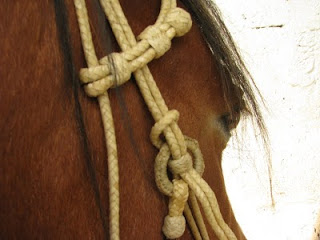 I eventually got this bridle fitted correctly, its made from 'rawhide' and I believe a style in evidence in Argentina or Brazil, very pretty. I haven't ridden in it yet, we're still happy in a headcollar.
I have slight problem at the livery yard, Abbey has escaped through some partially broken fencing and was eating herself silly in the next field, luckily they own that field as I would not like to be getting into the farmers land, that would not be good at all. They have some electric fencing which I have put up and I have purchased some more electric fencing to use temporarily until it is fixed. If only they would maintain their edges!!
Posted by clairesgarden at 8:27 pm 6 comments: 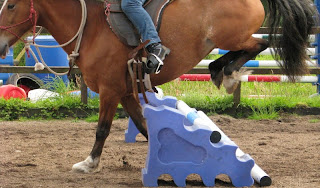 there was a couple of wee jumps set up so I though Abbey and I could try them. this jump is only a foot high....Abbey is going over it like it was three feet! she was a bit taken aback by these white and blue poles, we might try some walking and trotting over them this week to see if she learns they will not bite her, funny how she was showjumper in her previous life but still takes fright at things she must have seen before. 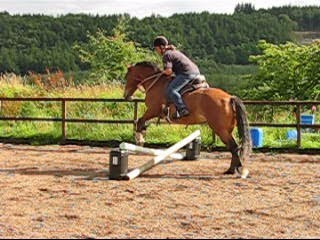 these are the older dulled down poles which did not seem to bother her at all, its probably less than a foot high in the middle and still she makes sure she has plenty of height. she puts a lot of power into her jumps and if I feel like she is throwing me out of the saddle. its been a long time since I did any 'proper jumping'......and it may a long time, if ever, before I do any more!

Posted by clairesgarden at 1:06 pm 7 comments: