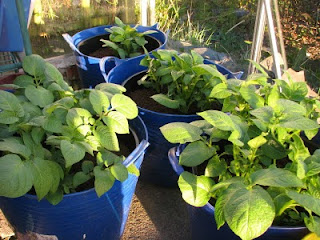 potatoes in the green house, about to be put outside as I will be needing the room, I like to do this as it provides some early treats for a couple of meals hopefully. the carrotts in pots aren't doing so well. 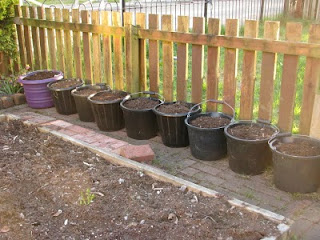 outside potatoes not doing a thing yet which shows what a difference the shelter of the greenhouse makes. 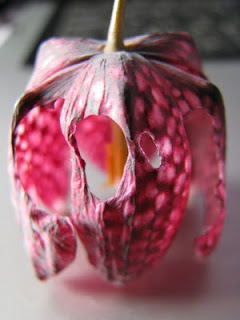 'something' is chewing on the fritilliarys..... 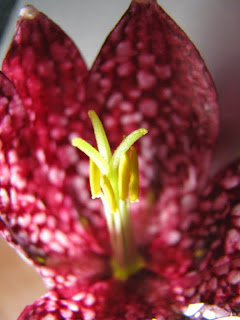 inside...fascinating!
its been all work and no play here, like the 'running faster to stand still' thing, I am so tired. a couple of days off coming up so a lot of sleeping in to be done I think! I would also like to get started on planting seeds in the garden beds, lots of plans! less running around to do as Abbey is now 'out' 24/7 for the summer, hope its a warm one! its nice to go up and ride and not have to muck out, carry hay and water all the time. she does get worried that this means she won't get a dinner every day......she gets a small token dinner.
Posted by clairesgarden at 12:08 pm

Look like your also busy gardening. We haven't yet planted our pototoes but have got few things in now.
Any way I never heard or seen carrots grown in pots.

I have my potatoes in a barrel,but what a good idea growing them in buckets.The chantenay carrots I grow in a trough.I live as far south as you can get so I guess our growing season starts earlier than yours!I'm already pulling rhubarb.Maureen

Nice work...
oou something really is chewing away at the flowers!
Well, I'm afraid that a pad is not the culprit with this saddle..it is TOO NARROW...it pinches her...she has graduated to a medium tree now. This one is a three finger width and she needs a 4-5 finger. I love my sheepskin pads with "Thinline" inserts. Anything with ridges or a pattern..she gets marks and lumps!Thoroughbreds are so blame touchy and sensitive...will go check out your pad though..always reading up! Thanks!!
KK

Dora, growing things in pots is good for when there is not enough room, or to start things early in the greenhouse, it does not give you as much as when its planted in the ground, but good for a wee treat.
Maureen, the buckets give a nice crop, my garden is too small to get a good potatoe plot in, need to water them lots .
KK, the suber pad is good, but whats better is that you have improved your horses back so much that she is widening out with muscle...good job!!

Claire!
Yes..I am so excited with this very neat problem..more muscles!
I LOVED that site..the English gal was kinda funny!
I think I am going to get a Suber pad, cause it looks really compy for the horse...and ONLY the best for my Wa mare!
What kind do you have...the smaller version or the whole saddle pad?
Thanks KK

hi KK, I had one of each, think I preffered the one with flaps.

Your gardens are beautiful already and it's not even late spring there - as it is here. Dear Abbey must be very happy to be outdoors again. I do hope you get to spend lots of time together adventuring.