Sunday in the garden

I spent all day Sunday in the garden. I finished sieving one compost bin, which I had been rained off doing last weekend and then I used a surprising amount of it up immediatley just for replanting and a few bits to scatter inbetween plants. The first lettuce patch was taken up, distributed amongst neighbors and replanted with brussels sprouts plants. The carrot patch is very poor, mostly due to it being one of Tansys best place to sleep, everything was squashed and the ground compacted so seedling cant come up. I have planted some celeriac in one bare corner and will leave the rest to their fate of grow or be squashed. Various things in pots were found homes,and many weeds found themselves without one. The tomatoes were given another haircut, I also cut off a few flowering stalks as this is meant to give them more energy to put into the tomtoes they already have. 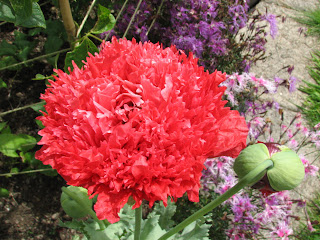 this poppy has self seeded just beside the bean wigwam, there is one in the onions too, not something to be weeded out. 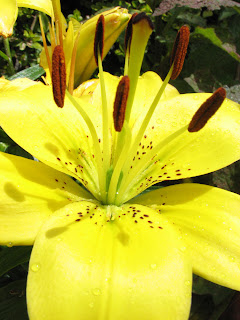 this lily is flowering really well, it started off a couple of years ago as a bit of side-shoot. 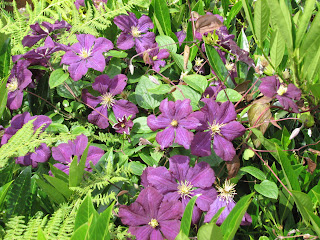 and the clematis is smothering the shrub its meant to be growing through, I'll cut it right back when it stops flowering.

Posted by clairesgarden at 7:49 am

i had my morning coffee in your garden. lovely way to start the day. St. Caffeine and i toast you. :o) thanks, Claire.

I love the colour of your clematis and your poppy. The poppy season never seems long enough. I find that there never seems to be enough compost, even if I think I have made a whole lot of it!!

Grannyfiddler, thankyou and you are very welcome!
Kate, poppies always seem to pop up unplanned, and the compost has all gone now, just as well theres always plenty of weeds to make more!

You were a busy woman!! Sounds like a great garden. Beautiful flowers.

Now that my garlic and shallots are out, I have a whole bed to plant in. Now's the time for us to start the fall garden.

Primrozie, I have various muscles still protesting about the 'all in one day' load! its just quite hard to get out inbetween the rain so when its dry it al has to be done, some of the weeds are over three feet high now. . .

Fantastic plants and info. as always Claire. So tell me should l be taking the excess leaves off my toms - is that what you mean by a haircut? l think l have done this before and was actually thinking yesterday of doing the same- time is running out and l don't want too many fruit clusters so that they won't ripen in time. How many flowering stalks Do you think should be on each tomato plant for this part of the world? :)
I should do a post on my problem areas of the garden and ask for help-lol.
Like your new profile pic- can just imagine how it feels riding so close on the water- l have never been canoeing before.
bests as always and keep safe ;)

Horizon, I have rmoved al the lower leaves and taken off some flowering stalks on the plants that already have some tomatoes, this is meant to help them ripen quicker but it does mean you get less tomatoes.