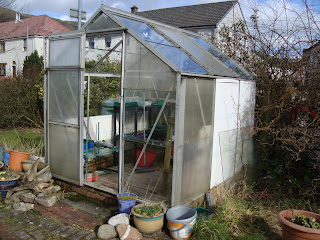 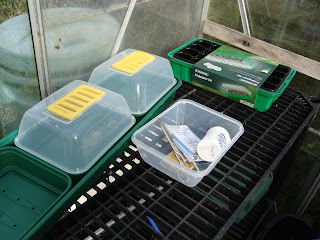 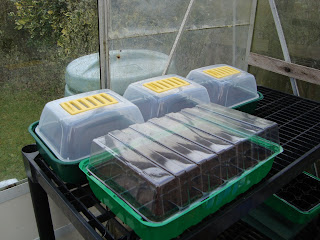 The bigger tray has Onions Walla Walla and Leeks Blue Solaise. Onions have 16 individual sections with two to three seeds each-to be thinned to one , the leeks have 8 individual sections with two seeds each-to be thinned to one, these are both for planting out . The smaller trays have salad mixes, one lettuce leaf mix, one spicy/ beet leaf and also scattered leek seed into a smaller tray to be used as salad, young leek looks like blades of  grass and is very yummy.
All seeds only used part of the packets, so there can be a second planting later on or seeds saved for next year.
That's a good start today anyway. There was a ray of sunshine when I started but just about sleet/rain by the time I was done, got a bit cold and wished I had put a jacket on.

From the MetOffice;; This Evening and Tonight:Clear intervals and further showers this evening. The showers becoming more confined to Kintyre and Ayrshire tonight with many areas becoming dry with clear spells. Minimum temperature 2 °C..Monday:Sunshine and the odd shower in the morning then cloud thickening to bring rain in the afternoon, some becoming heavy later as southerly winds strengthen. Maximum temperature 9 °C.

Posted by clairesgarden at 4:27 pm

Walla Walla -- local word to these parts -- it means: many waters

Even tho' it probably is a Spanish onion, we are very proud of that there onion and hubby says it is the only one he can digest. So in return I could say too bad it isn't a storage onion, because in our climate that would be what we need more!

Here's a clip and paste:

Walla Walla is a First Nations name meaning "many waters." In 1805, when Lewis and Clark traveled by the mouth of a small river flowing into the Columbia River, they met a group of Native Americans who told them their name for the small river was "Wallah Wallah." So Lewis and Clark called the Indian tribe by the same ...

But apparently they also use this word in both Hong Kong and Jamaica and there it means something else!

how interesting. thank you. I can't remember how i first found this onion , but it is a sweet onion and good to eat. I know it doesn't last too well stored. I remember growing a red onion as well that lasted better, but not attempting everything this year.

If small, in the fridge the Walla Wallas can last a long time, up to several months even -- and if larger -- and you are so inclined -- they can be chopped up and frozen to keep longer. However, I tend to not be so inclined as we tend not to end up using much of our frozen foods but instead feed them to the chooks... and our old hens say that they really don't really care for onion offerings... Garlic? Yes, they do! But then so do we. So a bit of competition there.

Did you know (you probably do) that you can cut the root end off of a garlic or onion and replant it to grow more? That is what we do a lot of here... Planted randomly. All our garlic at this place has been for free or end roots of what we buy at the grocery store and use in cooking.

Do you remember the name of the red onion you grew that lasted better?

P.S. Just for comparison purposes, I did the translations/conversions for your weather report above...

Apparently right now in our locale we are at 0 C degrees right now at 9:30 AM (at the freezing point), but hoping to warm to 11 C at a high later on today. However at our house we are in a bit of a itty-bitty mircro-climate which way more snow and rain than others very near by do. I am so very grateful to live someplace mild unlike what other areas of the country do, but know one day soon we may be moving away to where temperatures are far more extreme than this and then I will certainly have to learn to adapt to much hotter/colder on both sides and be happy -- and not sure if I can?! LOL

the red onion was Red Baron. I haven't looked for it but should think its still available.
my address, being right near some hills, gets a microclimate of more rain, than even five miles away. it'll be raining here and you can drive out of it, and then back in again.. generally good for the garden though.

We're expecting -6 C here this weekend and into this coming week! i think my current favorite saying should be "hold on little tomato!" as I am anxious to get edible things growing outside to harvest and still it is not yet time... (lots of little tomatoes [starts] growing inside -- they will go outside in June...)...

I have started in the greenhouse, butI think tomatoes will be seeded soon and I am probably going to do them in the house. I haven't checked this weekends weather yet , but I dont' think we'll get it as cold as you are. x