Abbey, the beginning of a journey 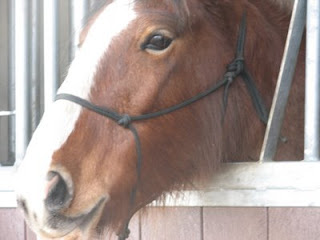 well its been a good week, getting to know the wee horsey. 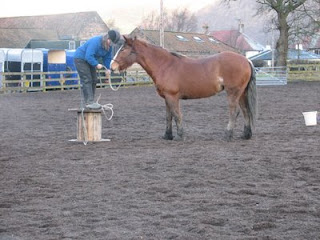 I've been playing natural horsemanship games, here I'm standing high up and she walked and trotted circles round me. 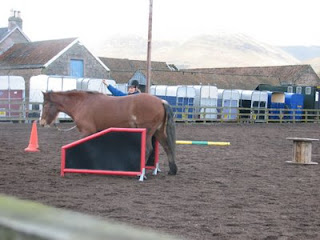 and squeezing through a tight space, when she gets used to this I'll put some wood in the middle for her to walk on. 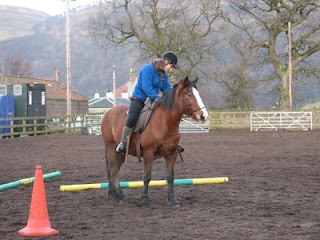 and this is the first time I've been on board, we did some flexing and a wee walk with bend to a halt. she did really well with the rope being thrown over her head(to change direction) 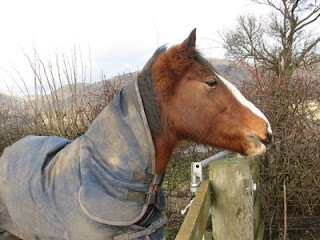 and after some nice dinner, she's back out in the field in a cosy rug.
on the subject of rugs, when I bought her she had a ripped one on, so I got her a nice blue one(like the one I bought Katie)....you know the poor wee horse deserves a nice rug.......that lasted a week and she totally ripped it..........in the same place her old one was so she obviously does not do well with rugs!!! those two rugs are now off to a good repair(restoration jobs!!) and very kindly this one was given by my friend Liz- it was meant to be the spare but there it is! and thanks to Liz too for coming along and taking the photographs of me and Abbey.
Posted by clairesgarden at 8:58 pm

Lovely! So excited for you and your new adventures with Abbey!

What Abby has on we called "horse blankets".

best of luck with the training. I've two of my own, and the 'baby' will be learning how to trailer this year.

Oh it's so wonderful seeing you out there playing and working with your new horse, Abbey. She looks so calm and cooperative, too.

By the way I have an award for you over at my place. Come by and pick it up soon :)

Claire, i'm still pretty excited too. a horse!! whoohoo!!
Peppylady, thats a sensible name, a horse blanket, I'll use that from now on.
HGF, hope your trailer stuff goes well!
Lisa, she is co-operative in a marish sort of way....oooh an award! coming right over!

She is beautiful. Congratulations :-)

A fine looking horse. May God bless you and your friends and give you a long and healthy life with Abbey

Alison, I think so too, and thankyou very much!
David, blessings for you too, thanks for visiting.

Abbey is just the ant's pants (even though she's a rug eater) :) I can see that you're having great fun. It's the beginning of a beautiful relationship, I'm sure. Enjoy!