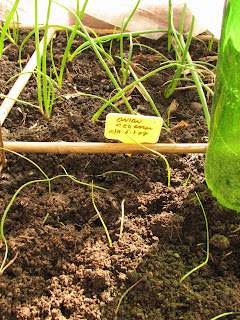 comparing Red Baron onions: at the back, seeded in the greenhouse on 6th january and planted out under fleece on 13th April, the front ones were seeded in the greenhouse on 10th March and planted out yesterday, honestly its not just bits of grass!! I like to use them when they are small and sweet, chopping up the whole onion and green stalk into a salad. 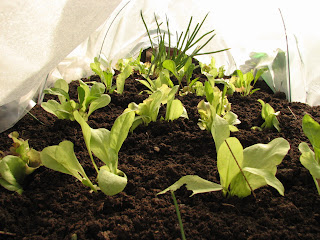 and these mixed lettuce were seeded in the greenhouse on 20th March and planted out under a mini-poly tunnel on 24th April, there is a small bunch of welsh onions in the middle. I have also plante out some asparagus kale under a tunnel.

Posted by clairesgarden at 10:32 am

I so enjoyed your posts showing the new Spring growth and the horses that you own...a dream for me! Loved the rhyme beads..great idea! I'll be back to keep tabs on your wonderful horses! from Canada NG

NG, thankyou, however I do not own these lovely horses, Smokey belongs to Rosemary of The Accidental Smallholder, Teddy and Robbie belong to a couple from Falkirk. they are all fab horses.
I am visiting Canada next month, looking forward to it!

Your lettuces will be growing fast this time of year! watch out for the slugs!

Matron, I wage constant war on the slugs, organically, so there are still a few million left!!!