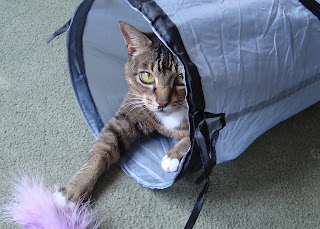 Casper is a bundle of energy, he's now been here over four weeks so time to start introducing the outside world, the first day he was out of site for about 5 hours... just as I really started to worry he appeared back. Then the rest of this week, as not as work, I've been here to let him out for a couple of hours in the morning and a couple of hours at night.
This hasn't immediately stopped him spraying in the house though, was hoping it would...but at 14 years old and on his third home this year... he's probably still settling in and for now I can put up with it. Every carpet in the house needed replaced anyway... and now that they are all decorated with cat pee... even more so.
I have never in my life, and all the cats that have shared that time with me, had a cat that does this.

The garden is getting ''damage control'' rather than actual gardening, more large shrubs cut right down. On Thursday I cut the grass and made a start on the hedge... its been allowed to grow to about 6ft and I would prefer it at 4ft at least round the front. Privacy is nice .. but... its too small a garden to have such a large hedge , makes it seem dark and cramped, and when I did garden  people could look over and chat.. now I don't even know who's passing by.
I took Casper out with me when I was pottering that afternoon...  but he wasn't impressed and took himself back into the house.

Posted by clairesgarden at 8:40 am

Being called away -- lots of moaning and groaning -- so must go now. Back another day.

OK, Claire, back again... Another day & alone for an hour or so now. No more moaning and groaning. Just some silliness along with the tiredness.

This might sound strange or unbelievable, but I think my boy kitty must drink his pee to allow him more time inside, since he is not at all a litter box cat and has never once sprayed or had an accident despite hours on end inside at night to escape coyotes. Which I am sure is why he finally decided to live with us after most of his kittenhood alone after his mom being taken off by said coyotes.

Whoop! No, there is an instance of questionable behavior. Once he threw up the store-bought cat food we gave him. And then went around to find little rags off the floor and laundry drying rack to cover it all up with -- hoping upon hope I would not throw him out and chastise him and keep him out for good. I found it later. A bit disgusting to be sure, but had to find the humor in it -- and try to understand what his thinking was on it all. He really wanted to have home and people who cared for him and would love him no matter what.

Casper, please, please, please, & pretty kitty too -- can you do that? Be more considerate to our good friend, Claire, as she gave you a good home to be in and all while at the same time is trying to fix up & sell her place? Asking a lot of a cat already with habits, I know! BUT... We know it can be done. It is possible.

ha. I'll tell him this. I'm hoping the more time he gets to spend outside then the less he will pee inside. he does use the cat litter but also uses corners. I don't know why and can only hope he is still unsettled with all his moves.

good luck to you both~LOL~!